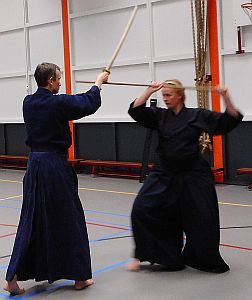 Traditional jodo consists of many different kata that increase in difficulty. Until recently, the number of jodo practitioners was very limited. Since 1956, on the advice of Shimizu sensei, jodo has been placed with the Japanese Kendo Federation, the Z.N.K.R. (Zen Nihon Kendo Renmei). At the end of this decade, it was decided to set up seitei kata so that jodo could be spread and practiced among a wider audience.

It took until 1969 for the seitei kata to be demonstrated in public for the first time. ZNKR jodo comprises 12 kata from Shinto Muso Ryu jodo and is completed by 12 basic techniques, the so-called kihon.